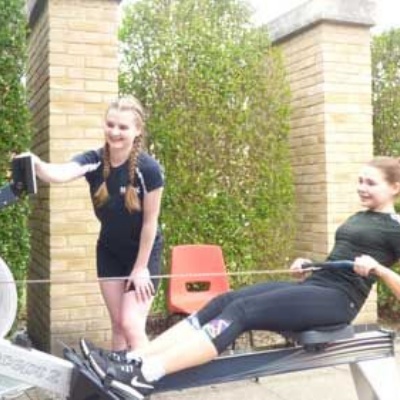 Sixth Formers, Hannah Bassett and Georgina Parker rowed for over 7 hours on Appeals Day to set a British record and raise funds for Magpas.

Whilst the whole school was busy raising money for Magpas Air Ambulance on Appeals Day, Hannah Parker and Georgina Parker started hours earlier, having set themselves the target of rowing 100km in under 8 hours.

Taking it in turns to row for around four minutes at a time, they continued their marathon row for 7 hours 39 minutes, smashing their target time and, at the time of writing, raising a whopping £1850 on their own.  They now hold the record for a tandem row of 100km by Under 19 Lightweight Women.

The school will add this to the rest of the money raised by stalls, food sales, competitions and fun activities by each year group and hand over the grand total to Magpas later this year.

Mr Meadows was full of praise for the girls' initiative and stamina, saying: "This was all Hannah and Georgina's idea and seeing them row hour after hour was incredible. It was a monumental effort and we are so grateful to them as well as being extremely proud.  All the students and staff contributed to a hugely successful day and we are very excited to hear how much will have been raised for Magpas".

Magpas representatives, Emma Sanders and Annette Ablewhite, were also at the school to cheer on the girls and watch the other activities. Emma was equally impressed by all that she saw:  "This was one of the most demanding challenges I have had the privilege to witness and I am so impressed by the girls.  I cannot believe they came up with the idea and through sheer focus, effort and determination they did it, WOW!  Thank you for everything the school has done and continues to do for us with your fundraising".

Anyone wishing to contribute to the girls' fundraising can donate here https://www.justgiving.com/fundraising/appealsday